Q) What is polymorphism ?

Method overriding: happens when a child class implements the method with same signature as a method in a parent class. When you override methods, JVM determines the proper methods to call at the program’s runtime, not at the compile time.

Method overloading: happens when several methods have same names but different number or type of parameters. Overloading is determined at the compile time.

Q) What is use of serialVersionUID?

Ans) The default Java serialization mechanism writes the metadata about the object, which includes the class name, field names and types, and superclass. This class definition is stored as a part of the serialized object. This stored metadata enables the deserialization process to reconstitute the objects and map the stream data into the class attributes with the appropriate typeEverytime an object is serialized the java serialization mechanism automatically computes a hash value. ObjectStreamClass's computeSerialVersionUID() method passes the class name, sorted member names, modifiers, and interfaces to the secure hash algorithm (SHA), which returns a hash value.The serialVersionUID is also called suid.So when the serilaize object is retrieved , the JVM first evaluates the suid of the serialized class and compares the suid value with the one of the object. If the suid values match then the object is said to be compatible with the class and hence it is de-serialized. If not InvalidClassException exception is thrown.Changes to a serializable class can be compatible or incompatible. Following is the list of changes which are compatible:

So, if no suid is present, inspite of making compatible changes, jvm generates new suid thus resulting in an exception if prior release version object is used .

The only way to get rid of the exception is to recompile and deploy the application again.

If we explicitly mention the suid using the statement:

Q) What is the difference between final, finally and finalize() in Java?

Ans) final - A final variable acts as a constant, a final class is immutable and a final method cannot be override in a child class.

finalize() - This is the method of Object class.It is invoked before an object is discarded by the garbage collector, allowing it to clean up its state. Should not be used to release non-memory resources like file handles, sockets, database connections etc because Java has only a finite number of these resources and you do not know when the garbage collection is going to kick in to release these non-memory resources through the finalize() method.

Q4)What is difference between HashMap and HashTable?

Q) What is difference between abstract class and interface ?

Ans) A class is called abstract when it is declared with keywordabstract. Abstract class contains atleast one abstract method. It can also contain n numbers of concrete method. Interface can only contain abstract methods.

Q) What is the difference between equals() and == ?

Q) What is difference between a thread and a process?

Q) What is use of synchronized keyword?

Ans) synchronized keyword can be applied to static/non-static methods or a block of code. Only one thread at a time can access synchronized methods and if there are multiple threads trying to access the same method then other threads have to wait for the execution of method by one thread. Synchronized keyword provides a lock on the object and thus prevents race condition. E.g.

Ans) Yes GC is a dameon thread. A dameon thread runs behind the application. It is started by JVM. The thread stops when all non-dameon threads stop.

The JButton class is used to create a labeled button that has platform independent implementation. The application result in some action when the button is pushed. It inherits AbstractButton class.

Example of displaying image on the button:

Java Swing tutorial is a part of Java Foundation Classes (JFC) that is used to create window-based applications. It is built on the top of AWT (Abstract Windowing Toolkit) API and entirely written in java.

Difference between AWT and Swing

There are many differences between java awt and swing that are given below.

The Java Foundation Classes (JFC) are a set of GUI components which simplify the development of desktop applications.

The hierarchy of java swing API is given below. 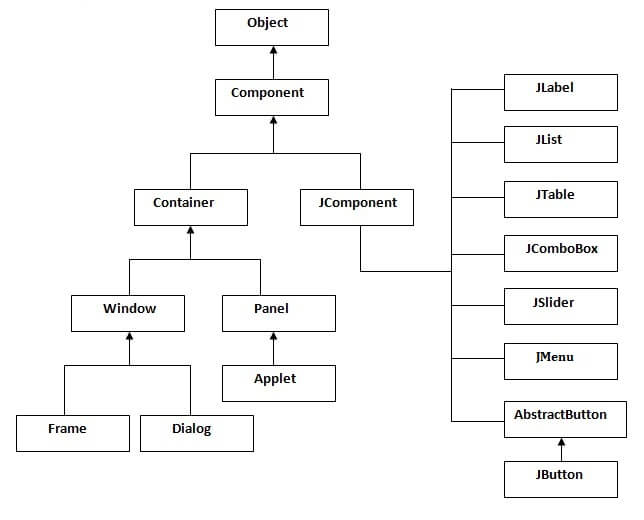 The methods of Component class are widely used in java swing that are given below.

There are two ways to create a frame:

We can write the code of swing inside the main(), constructor or any other method.

Let's see a simple swing example where we are creating one button and adding it on the JFrame object inside the main() method.

Example of Swing by Association inside constructor

We can also write all the codes of creating JFrame, JButton and method call inside the java constructor.

The setBounds(int xaxis, int yaxis, int width, int height)is used in the above example that sets the position of the button.

Simple example of Swing by inheritance

We can also inherit the JFrame class, so there is no need to create the instance of JFrame class explicitly.

The object of Label class is a component for placing text in a container. It is used to display a single line of read only text. The text can be changed by an application but a user cannot edit it directly.

The button class is used to create a labeled button that has platform independent implementation. The application result in some action when the button is pushed.

For registering the component with the Listener, many classes provide the registration methods. For example:

We can put the event handling code into one of the following places:

public void setBounds(int xaxis, int yaxis, int width, int height); have been used in the above example that sets the position of the component it may be button, textfield etc. 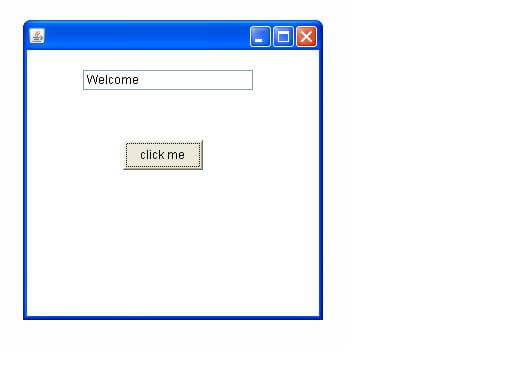 Java AWT (Abstract Window Toolkit) is an API to develop GUI or window-based applications in java.

The hierarchy of Java AWT classes are given below. 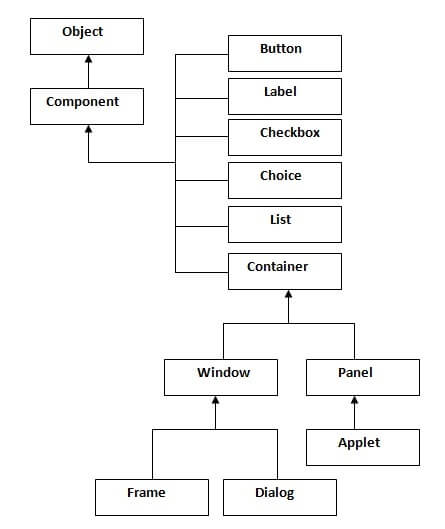 The Container is a component in AWT that can contain another components like buttons, textfields, labels etc. The classes that extends Container class are known as container such as Frame, Dialog and Panel.

The window is the container that have no borders and menu bars. You must use frame, dialog or another window for creating a window.

The Panel is the container that doesn't contain title bar and menu bars. It can have other components like button, textfield etc.

The Frame is the container that contain title bar and can have menu bars. It can have other components like button, textfield etc.

To create simple awt example, you need a frame. There are two ways to create a frame in AWT.

Let's see a simple example of AWT where we are inheriting Frame class. Here, we are showing Button component on the Frame.

The setBounds(int xaxis, int yaxis, int width, int height) method is used in the above example that sets the position of the awt button. 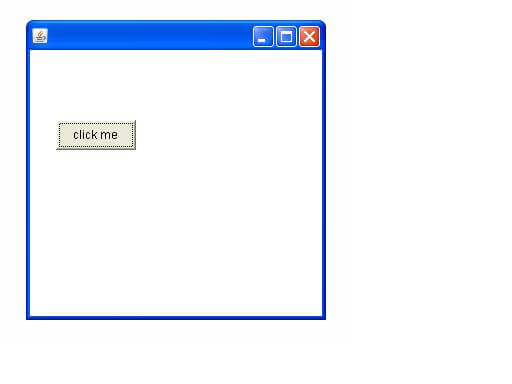 Let's see a simple example of AWT where we are creating instance of Frame class. Here, we are showing Button component on the Frame.

If you want to represent any object as a string, toString() method comes into existence.

The toString() method returns the string representation of the object.

By overriding the toString() method of the Object class, we can return values of the object, so we don't need to write much code.

How to create Immutable class?

There are many immutable classes like String, Boolean, Byte, Short, Integer, Long, Float, Double etc. In short, all the wrapper classes and String class is immutable. We can also create immutable class by creating final class that have final data members as the example given below:

The above class is immutable because:

Difference between StringBuffer and StringBuilder

Performance Test of StringBuffer and StringBuilder

Let's see the code to check the performance of StringBuffer and StringBuilder classes.

Published in Java Training
Be the first to comment!
Read more...

Difference between String and StringBuffer

Performance Test of String and StringBuffer

As you can see in the program given below, String returns new hashcode value when you concat string but StringBuffer returns same.

Let's see the examples of different methods of StringBuilder class.

The StringBuilder append() method concatenates the given argument with this string.

The StringBuilder insert() method inserts the given string with this string at the given position.

The StringBuilder replace() method replaces the given string from the specified beginIndex and endIndex.

The delete() method of StringBuilder class deletes the string from the specified beginIndex to endIndex.

The reverse() method of StringBuilder class reverses the current string.

Note: Java StringBuffer class is thread-safe i.e. multiple threads cannot access it simultaneously. So it is safe and will result in an order.

What is mutable string

The append() method concatenates the given argument with this string.

The insert() method inserts the given string with this string at the given position.

The replace() method replaces the given string from the specified beginIndex and endIndex.

The delete() method of StringBuffer class deletes the string from the specified beginIndex to endIndex.

The reverse() method of StringBuilder class reverses the current string.

The java.lang.String class provides a lot of methods to work on string. By the help of these methods, we can perform operations on string such as trimming, concatenating, converting, comparing, replacing strings etc.

Java String is a powerful concept because everything is treated as a string if you submit any form in window based, web based or mobile application.

The string trim() method eliminates white spaces before and after string.

The string charAt() method returns a character at specified index.

The string length() method returns length of the string.

A pool of strings, initially empty, is maintained privately by the class String.

The string valueOf() method coverts given type such as int, long, float, double, boolean, char and char array into string.

Published in Java Training
Be the first to comment!
Read more...
Page 1 of 8